President Donald Trump said Tuesday that Twitter, Facebook, and other social media platforms are discriminating against conservatives and other Republicans, and accused the companies of colluding with each other to limit online speech.

‘We use the word “collusion” very loosely all the time,’ Trump said during a joint press conference with Brazilian leader Jair Bolsonaro, ‘and I will tell you there is collusion with respect to that because something has to be going on.’

Trump’s White House social media manager Dan Scavino complained Monday that Facebook was preventing him from interacting with people who leave comments on his personal page.

And the president’s son Donald Trump Jr. wrote in an op-ed that ‘Big Tech’s censorship of conservatives’ has become ‘ever more flagrant and overt.‘

‘We have to do something,’ the president said.

‘Things are happening, names are taken off, people aren’t getting through. You’ve heard the same complaints,’ he said, referring to what conservatives have called ‘shadow-banning.

Trump claimed that executives at social media companies harbor ‘hatred’ in many cases, toward ‘a certain group of people that happen to be in power, that happen to have won the election.’

‘I do think we have to get to the bottom of it,‘ the president added, without suggesting any actions he might take.

He also renewed his attacks on traditional media, including TV networks and their newscasts.

Scavino’s experience with Facebook enraged Trump, according to a White House official. 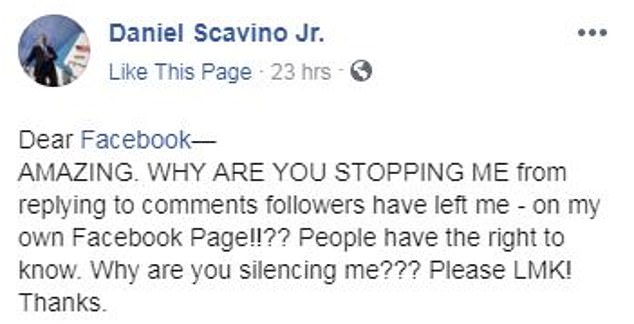 ‘Facebook, Google, and Twitter, not to mention the Corrupt Media, are so on the side of the Radical Left Democrats. But fear not, we will win anyway, just like we did before! #MAGA,’ the president tweeted Tuesday morning.

Scavino, a longtime Trump aide, posted a screenshot Monday night of a message from Facebook saying he was temporarily blocked from making public comments because some of his comments had been reported as spam.

‘AMAZING. WHY ARE YOU STOPPING ME from replying to comments followers have left me – on my own Facebook Page!!??’ an incensed Scavino wrote.

‘People have the right to know. Why are you silencing me???’