In a survey of key battleground states conducted after Biden entered the 2020 Democratic primary, Trump not only has a 46%-44% edge, but he has a 26-point lead among non-college educated workers earning $75,000 or less, considered the blue-collar base and a Biden target.

What’s more, the battleground state survey from WPA Intelligence showed that Trump does better with Biden’s other main support group, older voters, and has a 48%-44% lead over Biden in Florida, dubbed the Democrat’s “firewall.” 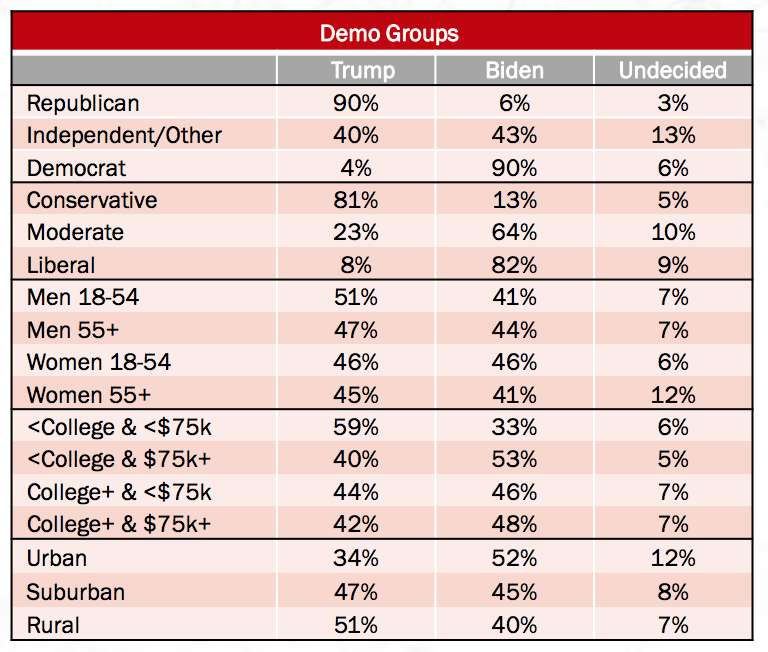 “Biden may be a blue-collar guy, but that doesn’t mean the policies of the left or the Democratic brand will suddenly recover with blue-collar voters,” said WPA Intelligence CEO Chris Wilson.

“President Trump has done a good job both rhetorically, and with policy, making it clear that he cares about working-class Americans to the extent that these voters should be considered Trump base voters,” added Wilson.

Wilson’s survey was the latest to also show a Trump recovery in the suburbs and with women.

Overall in four of the six states, Trump is beating Biden by margins similar to his victory over Hillary Clinton in 2016. In two others, he is within the margin of error.

“People who are writing off Trump because of his approval rating or because of the mid-terms might be in for a big surprise — again,” said Republican pollster Wilson.